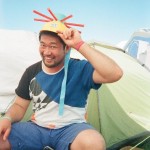 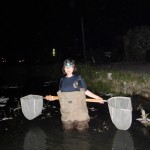 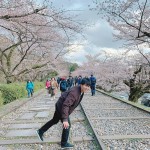 Affiliation: Master’s candidate, Division of Applied Biosciences, Graduate School of Agriculture
Contact: sonetaka.mikihiro.62m*st.kyoto-u.ac.jp (replace * by @)
Specialty: studies on marine bioresources
Hobby: fishing, playing tennis, enjoying anime, watching American football games
Research theme: Environmental DNA released from redspotted grouper Epinephelus akaara: ontogeny of diel rhythms and dynamics during spawning
Redspotted grouper Epinephelus akaara is a high-grade fish, known as ‘Ako’ or ‘Yonezu’. Although the stock of this fish is declining in recent years, there is little information about its ecology, specifically spawning in the natural environment. The present study aims at establishing techniques for both estimation of density and detection of spawning in redspotted grouper using environmental DNA. As a first step, I focus on changes in environmental DNA incidental to diel rhythms, ontogeny and spawning.
Career and Publications: 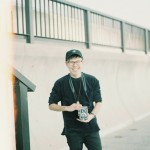 Affiliation: Master’s candidate, Division of Applied Biosciences, Graduate School of Agriculture
Contact: kamimura.shintaro.22z*st.kyoto-u.ac.jp (replace * by @)
Specialty: studies on marine bioresources
Hobby: taking photographs, painting, reading, fishing
Research theme: Environmental DNA released from Japanese anchovy Engraulis japonicus: dynamics in relation to predation and spawning
Environmental DNA (eDNA) is a promising tool for monitoring, which overcomes drawbacks with conventional techniques. Information about the presence/absence or biomass of a target species can be gained from DNA fragments that are released from the species to the environment. In general, DNA fragments are influenced by many biotic and abiotic factors before detected as eDNA. Examinations of such influential factors will enable us to use the eDNA technique more accurately. The present study focuses on how predation and spawning affect the dynamics of eDNA in Japanese anchovy Engraulis japonicus.
Career and Publications: 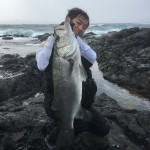 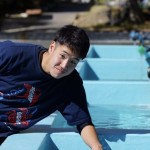 Affiliation: Master’s candidate, Division of Applied Biosciences, Graduate School of Agriculture
Contact: koide.yuki.27e*st.Kyoto-u.ac.jp (replace * by @)
Specialty: Marine ecology
Hobby: diving, underwater photography, playing soccer, visiting aquariums
Research theme: Predation pressure on herbivorous fish by spiny lobster
Iso-yake is a phenomenon that seaweed beds disappear in a short period of time. This phenomenon causes problems such as a loss of nursery grounds for juveniles not only in the coasts of Japan but also all over the world. Excessive feeding by sea urchins and herbivorous fishes such as rabbitfish and parrotfish is considered to be a main cause of Iso-yake. Spiny lobsters have been reported to prey on sea urchins in Japan as well as in other countries and may play an important role in maintaining seaweed beds. Furthermore, there are observations that spiny lobsters preyed on sleeping rabbitfish at night in experimental tanks.

In this study, I verify the potential of spiny lobster as an important predator of fish through an experiment. In experimental tanks, several fish species including rabbitfish are made to encounter lobsters and their behaviors are observed during the day and night. This will explore the possibility that spiny lobster is a predator of herbivorous fishes and functions as an umbrella species in seaweed beds.
Career and Publications: 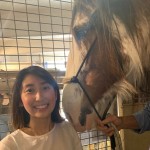 Affiliation: Master’s candidate, Division of Applied Biosciences, Graduate School of Agriculture
Contact: kouno.yukako.35e*st.kyoto-u.ac.jp (replace * by @)
Specialty: Ecology on invertebrates
Hobby: Kung-fu, traveling, eating good meals and drinking
Research theme: Mechanisms of predator avoidance in Japanese sea cucumber
The goal of my study is to reveal behavior and ecology of Japanese sea cucumbers particularly with reference to predators. Sea cucumber is one of the most important fishery resources often used for Japanese cuisine such as “namako-su (sea cucumber sashimi in vinegar)”, and dried sea cucumber has a high commercial value in China as a luxury food stuff. Despite its importance as a fishery resource, little is known of their behavioral ecology. Sea cucumber is known to display different diel activity depending on the presence or absence of predatory fish according to the previous research in our laboratory (Yamaguchi et al. 2016, Fish Sci). Following this, I will investigate the mechanism how they detect their predators by observing behavior under manipulated conditions.
Career and Publications: 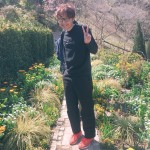